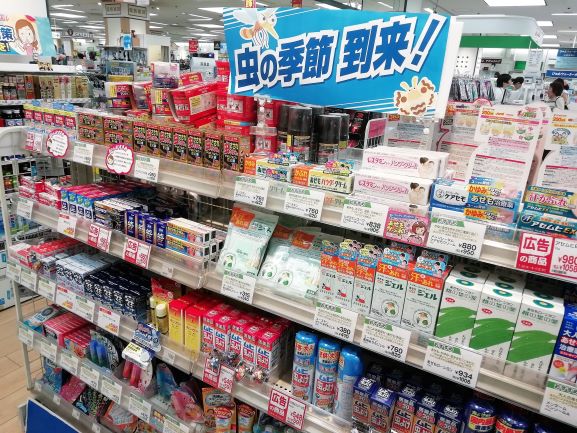 One of the things I don’t miss in the Philippines is mosquitoes. In Japan, where it is dry and cool pretty much of the year, it’s not something that bothered me often. In the summer though, mosquitoes start proliferating everywhere and in the most unexpected places.

Type O blood is said to attract mosquitoes the most, and as most Filipinos are Type O, this is most likely going to be a problem. Mosquitoes in Japan are also quite different than in Manila. They’re bigger and the bites are stronger. They remind me of mosquitoes in the provinces. I was told it’s probably because Japanese eat better food so the mosquitoes are equally nourished. Lol

Since I’ve been getting a few bloodsucking bites recently, I started looking for medicine. One has been recommended for me and it’s called Kinkan. It’s a liquid type ointment you can spot treat an insect bite with. Basically like Efficascent oil or Katinko in the Philippines.

The smell is quite strong and a bit unpleasant if you take a whiff from the bottle. When you apply a small amount on the affected area though, the smell is not so strong. It also starts smelling like the ointments we have in the Philippines. The day after I applied Kinkan on my mosquito bites, the blisters and the redness lessened a bit, but the itchiness is definitely gone. I kept applying just so that the swelling would completely disappear.

Kinkan is definitely a useful medicine in anyone’s kit especially for insect bite magnets like myself. It may be also used to ease shoulder pain. A bottle 50mL bottle costs around \700 yen, but I think it will go a long way if only to be used with insect bites.