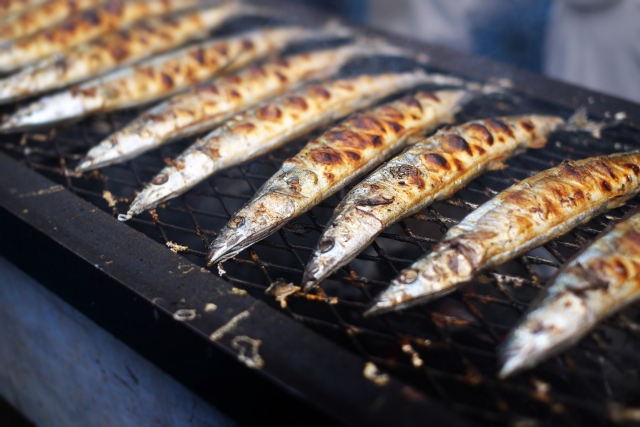 When the temperature starts to drop and the leaves start to turn red and gold, the long humid days of Japanese summer give way to autumn. In Japan, Autumn Season is between September to November. They also call it as the traditional season of food and dining.

One thing that the Japanese people, even the tourists, look forward to is 食欲の秋 (shokuyoku no aki) or “Autumn is the season of hearty appetites”. The fall harvest is the best time to enjoy a bountiful selection of Japanese ingredients at their very peak. From the delicious foods to the beautiful fall foliage, Autumn is undoubtedly the best season for many.
There are so many fantastic fall foods from which to choose, each with their distinct flavor and regional variation. These versatile ingredients effortlessly bring the feel of Japan’s hearty autumn to your table.

1. Pacific Saury (さんま, sanma) is a kind of fish Japanese people like to eat during the autumn season because of its fatty flavor. Most Japanese people typically broil sauries with a little bit of salt, squirt a little lemon or yuzu, and pour on a bit of soy sauce before enjoying this fatty fish.

2. Matsutake mushroom (まつたけ, matsutake) also known as the “king of Autumn Foods”, is one of the most expensive autumn indulgences. They’re found growing under fallen leaves in pine tree forests and due to pine trees being under attack by the pine-eating nematode, the mushrooms have become even scarcer over the past fifty years.

3. Chestnuts (くり, kuri) are a favorite Japanese autumn food. It can be roasted as a snack (yaki-guri) or cooked together with rice (kurigohan). Chestnuts are also used in a number of traditional Japanese sweets (wagashi) as well as Western sweets like mont blanc cake.

4. Persimmon (柿, kaki) is a fruit Japanese people enjoy eating mainly in autumn. There are two kinds of persimmons: one is sweet, and the other is sour, which is usually used to make dried persimmons. The sweet one can be eaten fresh and can also be used as an ingredient for making desserts like jelly, Yokan, and more.